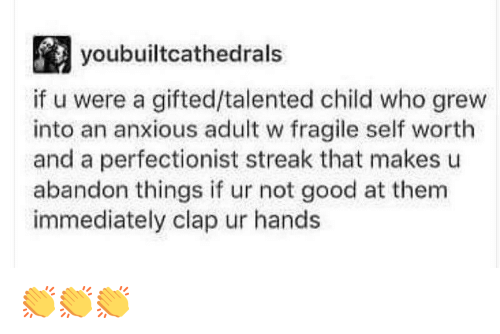 In fifth grade, I fought tooth and nail to get into Enrichment for the last two weeks of school because my best friend was in it and said it was fun. I took a bunch of tests and barely made it. When I went into the sixth grade version, it was the worst class I ever had. The teacher mocked me in front of the whole class, saying I should be medicated for mental illness and anger problems. (All because I corrected him on a wrong measurement. And guess what? I was right and he was wrong. Thanks, Col. Leonard Scott of Central Middle School! Here’s a glowing article of my adult bully with derogatory anti-Japanese World War II propaganda on the walls.)

In seventh grade, I didn’t qualify for Pre-AP English. I got a C on my final paper. I fought with the teacher. I cried. We fought with administrators. And they let me in. The teacher didn’t like me. When I spoke up in class, she treated me like a nuisance. (Thanks Mrs. Fields!)

In high school, I got into a few AP classes, but it was a struggle for me to maintain my grades and motivation. I loved my Creative Writing and English classes, but I struggled with everything else. I lost a lot of drive. I lost self-esteem and felt like I didn’t have the mettle to prove myself worthy. I gave up on the idealistic image of being an academic success and decided to work at becoming an alternative creative genius instead.

But alas, this plan also failed. At seventeen, I began with a musical. I designed sets and costumes, held a photo shoot, raised funds, directed actors, and booked a venue. But one by one, all the pieces fell apart and the musical was never performed. I was absolutely devastated. Heartbroken. It was worse than any breakup I’ve been through.

As a result of my perceived failures, I only applied to one college: Oklahoma City Community College. I lost motivation to challenge myself, so I grabbed up the low-hanging fruit to pursue a film degree. And yet, I found myself challenged anyway: the film program at OCCC is second to none in the region. I gave up on this too, getting my Associate’s degree by the skin of my teeth and only after changing my major so that I didn’t have to complete my two final classes. I still claim a film degree because I completed almost the entire program, but truth be told, I quit just before reaching the finish line.

In the middle of that, I dropped out a couple of times and tried to make a found-footage horror film. My friends and I traveled across the entire state to scout locations. We held auditions. I created an Indiegogo campaign and held a fundraiser with live music and an art auction at a local venue. I created an LLC. I wrote most of the script. I delegated tasks across the team. But ultimately, at the advice of someone I used to be close to, I scrapped the project. It was too ambitious for someone with no experience. I slipped into a downward spiral after this, binge drinking and drifting aimlessly. I met the man who is now my ex and found enough stability to complete my Associate’s degree, but I was still stagnating.

It was during this time that I bandied around in local politics with my ex who was already entrenched in that world, all but giving up on my own creative dreams in favor of his and being a part of something greater than myself and helping people. But I met some epic failures here too. I never completed a single campaign. The industry is unbelievably cutthroat and fake. Don’t get me wrong: not everyone is this way, and I made some of my best friends through my forays into volunteering and activism, but I also burned bridges. I was so stressed out that I called the police to report that my car was stolen when I had just left it parked somewhere else. I knew that I didn’t belong here and had to make a change. I came all the way back around to college for a Bachelor’s degree and I realized that I needed to get back to my roots: writing.

While contemplating what major to pursue and discussing Professional Writing, someone I really looked up to at the time sneered and said, “What do you even have to write about? The Oklahoma Democratic Party?” I will never forget her tone and the absolute shit she took all over my passion and talent when she said that. She urged me to be practical, to pursue something that would make me money. I understand where she’s coming from, but at the end of the day, what she told me with that particular comment was that I didn’t have what it takes to make it, and I resent that.