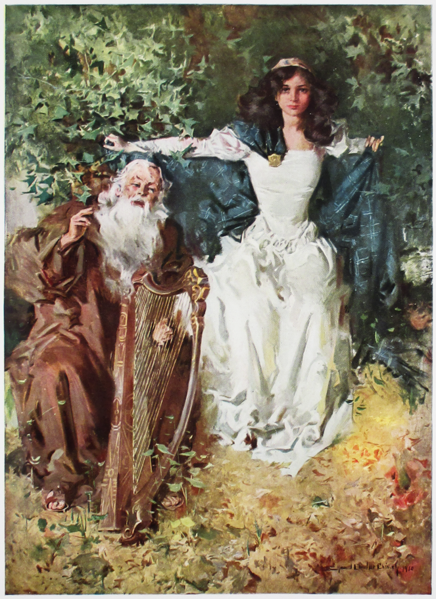 Nimue, who would later be known as the Lady of the Lake, was born remarkable.

She glowed bright from an early age. Her connection to the natural world stirred deep fascination in her to study its mysteries. She saw patterns and everything. She hungered for knowledge.

And while her glow would draw to her the greatest teacher she could ask for, it would also illuminate his impurity. Merlin, the oldest humanoid creature of ancient magic, became corrupted with the simplest evil that plagues men: lust.

Her creativity and intuition brought him the joy of old man passing on his legacy, but what attracted him to her the most was her youthful eagerness. She gladly sought his instruction. He gladly warped and arranged to the circumstances to prey on her innocence. His superior power and experience allowed him to loom over her and feast on her energy. She became sucked into his vortex, tasked with the impossible quest of filling the bottomless pit that was his loneliness and secret inadequacy.

However, even beneath Merlin’s planetary shadow, Nimue thrived. She absorbed the secrets of the universe. She became an active member of the politics and adventures of Camelot. She dug her bare hands into the fertile ground of men’s fortunes and follies and played in it. And she became acquainted with the gargantuan energy of the Dragon, the beastly creator, destroyer, and keeper of the earth.

Soon, she surpassed Merlin in skill, appeal, and intuition. She began her transformation into an ethereal creature like him. His loneliness would not allow this, for he knew that if she should converge with the universal consciousness that she would become aware of far greater, more powerful, and more fulfilling beings and places than mere Merlin of Camelot.

He began to hound her with his affections, teaching her that sexual elation was the purest path to spiritual transcendence. He seduced her again and again and again until she became disconnected with her otherworldly magic, falling into the human trap of orgasmic pleasure. He used her virginal ignorance to warp her search for the ultimate truth.

But late in the night while the old man slept, Nimue was blessed with a vision. She saw another young sorceress, Morgana, come to Merlin to beg him to teach her the ways of the magician, and what unfolded was the exact same conversation that she had had when she first approached him. Morgana pointed out the same artwork on his walls, confessed the same dreams and naivety. Merlin offered the same interpretations and explanations for everything in her life. And it was in this moment that Nimue realized she was not uniquely wonderful to Merlin, and that if he could, he would trap another soul into his neverending mission to satisfy his ego and assuage his loneliness.

So Nimue arose from the bed they shared and took off into the woods. Merlin sensed her energy growing more and more powerful and rebellious, so he followed her even though he knew his fate. He tried to convince her to stay in every way he knew how. She knew that even if she was able to leave him, he would start a cycle of trapping another young, developing woman.

So she feigned repentance and asked for him to show her the secrets of the ancient tree and how its roots must grow deep and sturdy into the ground in order for its branches to reach toward heaven. Merlin could not resist an opportunity to offer a long-winded explanation. He knelt down to the tree trunk and opened a window into its thick roots. Nimue kicked him into it and then closed the portal, sealing him inside forever. She was free to seek the universal truths all on her own.

As time passed, she blossomed into a powerful sorceress, advising King Arthur and the Knights of the Round Table on every important matter. She developed deep connection to the spirit of the earth and finally, after many years of study and catching up from all the time she’d lost, she reached Convergence with the universal consciousness.

At this point, she transcended the boundaries of time and space, but never forgot the deep love she had for her place of origin. She floated in the primordial waters of her home, her spirit becoming one with the mystical lake and forging the legendary sword Excalibur from the ancient essence of the Dragon’s heart. And here, remarkable Nimue can still be found, though she is all around us too, in the night sky, in the ocean, and in the water of our minds, teaching us that it is okay to grow out of what nourished us once, and encouraging us to go deeper and farther into places we otherwise would never know.

Bibliography. King Arthur: Tales of the Round Table by Andrew Lang and illustrated by H. J. Ford (1902).

Author’s note: There are many different versions of this tale, but this one is mine. In the unit we read, Nimue (she’s called Vivien is this version) is an evil bitch who exploits Merlin’s love and traps him in a tree after she gets all the knowledge she wants from him. In Malory’s version, though, Merlin harasses her endlessly despite her rejections and she knows she has to get away from him somehow. I want to go back and flesh out this story because as it is, it’s pretty rushed, but this is, like I said, my version.

Image source: The Lady of the Lake